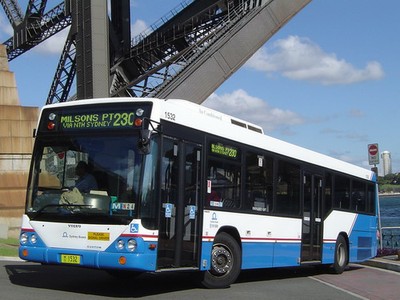 Last week was lovely. A bus driver made it that way.

On Tuesday just as I walked out the office door, the bus I wanted to catch went by. (The 230).

I paused for a second, then decided to chase it. Pulled out my hairband and combs, started running at top speed for a block and a half, dodging people left and centre, hair flying wild, but it pulled away before I got there.

I must be getting slow in my old age as another bus got there before me. The second-best bus pulled in – it goes three-quarters of the trip – and I had to dodge a few more people to catch that one.

I sat down, stuck my head out front to see if there was any chance of catching up with the bus in front (sometimes they leap frog each other along Military Rd), but it was so far in front I sat back and started reading the latest blog posts on my tablet. Intently.

Unbeknownst to me, when we arrived at Spit Junction, we had caught up. The bus driver recognised me from the 230 bus in the morning, and leaned around and said ‘hey – we caught up. Would you like to catch the bus in front?’.

He beeped the bus in front, who stopped and waited for me to hop off and on to the front bus.

Doesn’t that restore your faith in Sydney bus drivers?