creation of a mini meme 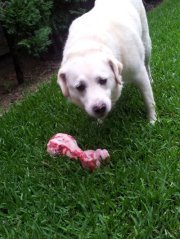 How my feral fourteen-year-old created a local mini meme.

It was morning. He was sleeping in. It was Spike’s birthday and I had a giant bone from the butcher’s for his birthday. But the feral wasn’t functioning.

So I gave Spike the birthday bone and took a photo with my camera. Came back inside and messaged it to the feral. Such a cute photo that he had to get up then, and go and see how Spike was enjoying it and give him a hug.

Uploaded it to his Facebook account, and tagged it ‘bday bone’. The photo got 50 likes from his friends, who spread it. Can’t verify this – he has great privacy, and won’t friend me :(.

On the weekend the xbox was on, playing Call of Duty. Some unknown guy on another team called out something like ‘when they give you a bday bone, you gotta grab it’.

Does that qualify as a meme, when it’s got a life of its own, with people you don’t know?